The decade-long crisis in global politics and economics may provide nightmare fuel for the politicians, the economists and those who must deal with the consequences of their decisions, but it is a lucrative literary boon to the academic. Every dusty hypothesis, from the cranked to the ingenious, has been sent from the office drawers to bookshops worldwide, creating a market for the concerned everyday folk who aren’t happy with the way things are but are not sure what they would like to see change. Kate Raworth’s ‘Doughnut Economics‘ sits firmly in that market – a meticulously-researched, persuasive argument for why we should bend our economy right the way around until it looks like a circle.

Raworth’s book stands on the basis that, to build an economy which works for the 21st Century, it must be designed with one key player in mind: the environment. The inherently far-off nature of climate change has allowed multiple generations of politicians to place it ways down on their to-do list, subsequently worsening the crisis which they do not resolve to, well, solve. But this position, just like the environment, is no longer sustainable. The uncomfortable truth is that climate change is already here, and its impact has only worsened since the publication of Doughnut Economics. In arguing that an economic revolution is not just politically necessary, but necessary for the continuation of humanity, Raworth prescribes a sense of urgency which few other books of its kind can muster.

Refreshingly, her preferred model of the Doughnut is fully articulated and laid-out, even if many of the rhetorical devices employed to explain it may leave you rolling your eyes.

There it is, in all its Doughnut-y glory. As you can see, the Doughnut argues for a ‘regenerative and redistributive’ economy, a circular flow of money and social goods which do not, and cannot, leave the pre-determined barrier. In order to achieve this, Raworth highlights the enemy of sustainable economics, which many traditional academics (and, indeed, much of the public) would be aghast with: growth. A decent chunk of Doughnut Economics is spent taking readers through how economic growth has been conditioned into our societal mindset as a good in itself, as has the idea of neverending, perpetual growth, in spite of our knowledge that all things must stop growing lest they become out of control.

I shall refrain from providing too much analysis of this element of the book, for I am, by-and-large, an economics virgin; while Raworth’s case is convincing, I may find a pro-growth book or article equally so. Many have touted the book as good for those like me, providing an accessible entry point into the world of economics, yet I would disagree; to fully engage with the book, one must have at least a decent foundation of understanding of economic theory. How can we agree that the world needs tearing down if we don’t know what it is we’re disposing of?

Fortunately, Raworth provides ample examples (to the point where it becomes exhaustive) to highlight the role which unrestrained economic growth has played in stagnating living standards and upholding inequality. The most interesting thinking of the book comes with Raworth’s thoughts on how to practically link economics with social wellbeing. She highlights how Aristotle differentiated between economics (household management) and chrematistics (wealth acquisition), arguing that modern economics has become utterly obsessed with the latter. She asks why economics is not like medicine, where doctors must abide by a code of practice which considers the safety of the patient sacrosanct, as opposed to merely the pursuit of medical knowledge. Why do economists not have to take their own version of the Hippocratic Oath – particularly when economics has, arguably, a greater impact on our lives?

This is where I would disagree with other reviews of the book, such as the LSE’s. Doughnut Economics is full to the brim of examples and policy suggestions, even if its flowery language does mask that from time to time. Eye-rolling though it may have been, it illustrates Raworth’s belief in the power of, err, illustration and rhetorical devices to create policy. The guiding principles of economics are based in pictures, just as the Doughnut is; early on in the book, she points to neuroscientific findings that half of the nerve fibres in our brains are linked to our vision and, when our eyes are open, vision accounts for 2/3 of the electoral activity in the brain: “it takes just 150 milliseconds for the brain to recognise an image and a mere 100 milliseconds more to attach a meaning to it.” Policy proposals are vital, yes, but perhaps if the new generation of thinkers wishes to persuade, they must first turn to pictures (a particularly warming notion for me, the filmmaker).

Indeed, the book is surprisingly optimistic, also pointing out the essential yet so often unseen strides which individuals, communities, groups and governments have taken, and are taking, to recalibrate the economy. From the universal basic income being trialled over 10-15 years in Kenya, by the US charity GiveDirectly, to the work of Bernard Liataer, who successfully transformed the ‘run-down’ district of Rabot in Belgium into a social and environmental powerhouse, introducing a local currency which residents could earn through community action and spend on what they had wanted all along – plots of land to grow their own food – Raworth instils some confidence that there are good people out there, doing good things, despite what the news will tell you. 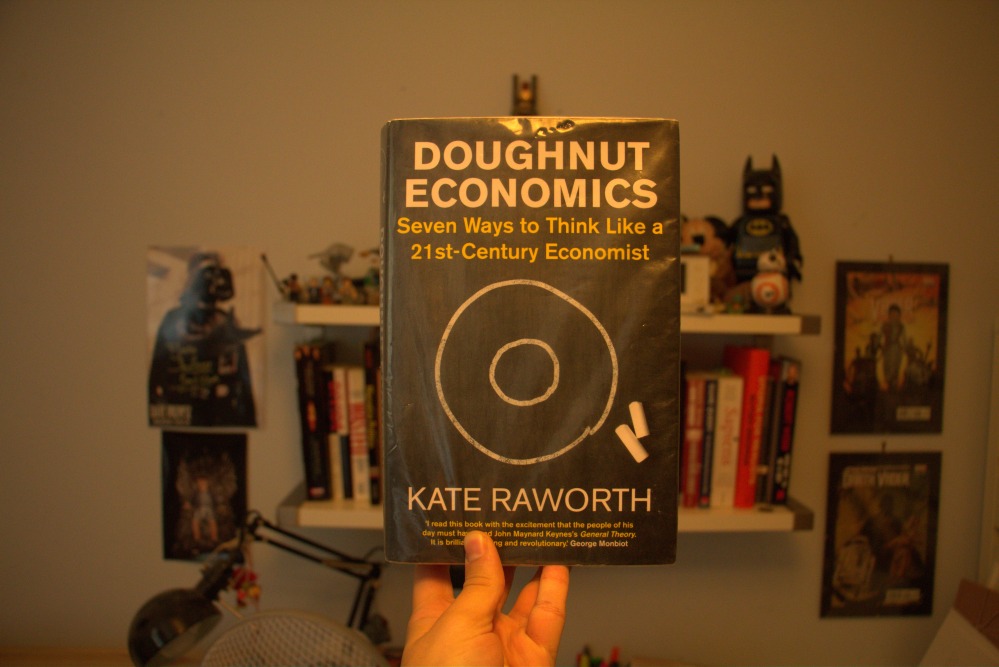 For the 21st Century radical, the addition of Doughnut Economics to the bookshelf cannot go amiss. Even if you find yourself humming at the unabashedly left-wing nature of the book, I would hope it can be a common agreement that the economy isn’t really working and some big changes must come over the next few years – and they no doubt will. With climate change now firmly on our doorstep, perhaps it wouldn’t be a bad shout to look to the Doughnut to save us all.