I burned through Tom Watson’s Downsizing in the first two days of 2020 and found it indelibly refreshing. Partly this was because it’s rare to read a book by a politician which isn’t entirely about politics (or so we think); but largely, because the mere existence of Downsizing is so unexpected. Watson illustrates this in witty and emotive prose, detailing his numerous attempts at dieting and spelling out exactly how unhealthy and overweight he was, exactly how he got to that stage, exactly how it felt and – most importantly – exactly how he got himself out of it.

Downsizing is structurally intriguing. As the title and premise suggest, one would expect its pages to begin with the ominous shadow of the figure behind and end with the manifestation of Tom Watson as he is today. My expectation proved only somewhat correct; the first third of the book is autobiographical, exploring Watson’s various stabs in the dark at dieting. It is a joy to read (although I am often partial to the biographical) but I felt a deep melancholy in his words. There is an unashamed fondness for him long gone, the boy who delighted at his mother’s “crowd-pleasing desserts like syrup sponge served with custard” and, later, the young man at the University of Hull in his “Young Ones-esque student digs,” where “fried breakfasts were the order of the day … comprising platefuls of greasy eggs and gristly sausages, served up with baked beans, HP sauce and a stack of buttered white bread.” Descriptions of food and drink are lavish and plentiful, in the way that those who love it too much are wont to write. Watson soothes and lulls the reader through stories of his past, and the portrait painted is of one who is – was – fundamentally content.

Yet, the melancholy derives from our awareness that this is all illusory. We know that because we know what this book is, and we know that no matter how much fun Watson was having (or would like us to think he was having), the events espoused were the bones of the man he would come to destroy. In one anecdote, Watson is visiting friends in Oxford, who have made a “dessert of home-made Bakewell tard and custard, which they knew was a particular favourite of mine.” After the others all departed for bed, stomach-rumbling Watson took a detour to the fridge.

“I’ll just have a tiny sliver for supper, I thought, as I grabbed a jammy wedge and dipped it in the jug of cold custard. One’s not going to hurt, is it?“

Of course, it did, and before he knew it he had “polished off the remaining three slices too, leaving behind just a smattering of pastry crumbs.”

“Any sense of dignity, propriety and restraint vanished as I succumbed to an intense and irrepressible urge to sate my hunger. I didn’t enjoy it. I didn’t even taste it. I just had to have it.”

Watson cuts to the core of the psychology of obesity, a deep and perhaps unexplainable compulsion to consume. The devil-on-the-shoulder, egging you on in spite of your better judgement because it’s better to have too much than too little and at least in eating you know the devil will dissipate as soon as the teeth slam down on what is holy and sinful at the same time, leaving you in the comfort of your familiar self-castigation.

Downsizing reaches what one would expect to be its natural conclusion relatively early, as Watson, across 2016 and 2017, is diagnosed with diabetes, takes up regular exercise, and discovers the keto diet.

“All manner of starchy carbohydrates (pasta, race, grains and potatoes, for example) were strictly forbidden, as were sugary carbs in all their many guises. Highly processed convenience foods were wiped off the menu, too, in favour of natural, wholesome, home-cooked alternatives … The prospect of this was so exciting that it quite literally put a spring in my step. Towards the end of my week in Torremolinos, and for the first time in decades, I went for a jog.”

Soon, Watson is dropping pounds and clothes sizes alarmingly fast, and the book becomes peppered with notes of joy and optimism as his life changes for the better. His sleep, cognition, demeanour and mental wellbeing spike upwards, and it is genuinely heartening to read, particularly knowing that all of this psycho-physical struggle was occurring against the backdrop of being Deputy Leader of the Labour Party during a time of momentous political disarray.

But Downsizing is more than the latter-day success story of Tom Watson. My Anthropology supervisor is fond of telling us that “food is more than fuel for the body“; similarly, in my A-Level Politics classes the 1960s-era affirmation that “the personal is political” was hammered into our heads and homework. The story of how Watson lost 8 stone, reversed his diabetes and regained his health (to mildly paraphrase) is told relatively speedily, with the rest of the book devoted to a fierce polemic against the industries and institutions which fuelled it.

This can make for necessary but uncomfortable reading. Watson piles on the statistics: shockingly, UK children between the ages of four and ten are “now estimated to consume 5,500 cubes of sugar per year; that’s about 3.5 stone (22 kilos).” If you want to burn off the calories from one can of Coke, “you’d have to walk five miles or run for fifty minutes.” In 2016, the average UK teenager was drinking 234 cans in a year, but undoubtedly not walking the three miles per day needed to burn all those calories off. Why do we consume so much that is eminently bad for us? Watson underlines how blaming ourselves is a lie spun from neoliberal politics, when the finger should be pointed at the corporations who have paid billions to engineer absolution.

“Back in the 1970s, fake food was being sold to working-class people as liberation. Why slave away in the kitchen making tea for the family when you could throw in some fish fingers and oven chips and keep everyone happy, with hardly any fuss?”

The key takeaway from Downsizing, besides the knowledge that remoulding the shape of one’s body is possible, is that all our bodies are political no matter wherein the time and space of politics one sits. To devote the book entirely to his own journey would be to miss the point; we are not fully autonomous, nor wholly products of forces external, but rather somewhere in-between. To reshape our body is, at first glance, an individualist effort, but Watson’s lambasting of the big sugar companies who lie to the world and turn a profit from it is a reminder that our efforts are inextricable from those forces external, and the parliamentary legislation underwriting them.

Food is not the commons, it is a commodity; access to it and to what kind is configured by the invisible hand and encompasses all manners of political, geographic, economic and class considerations. When it comes to my own weight and size, I know the buck stops with me. Nine times out of ten, it is up to me how much of I put into my mouth, but what I put in my mouth is regulated by those in my immediate vicinity or those who stand far away and assign a numerical value to that which keeps us alive and unhappy all at once.

I also know that my own weight and size, and the psychology of that, is intertwined with our history as welfare recipients, the need to give two young children anything to shut them up and stop them starving, and the desires of those to gorge and fill their bellies, eating up too many portions because they too feel a compulsion to consume, hoovering and hoarding the food we truly crave and leaving the cupboards bare bar for sugar and salt. At the core of Downsizing is the lesson Tom Watson really learned from his weight loss journey: it was never he who ate too much.

“We wolfed down mountains of chemically reconstructed, additive-stuffed synthetic imitations of actual food. We drank lakes of sugar that burst with bubbles and never quite quenched our thirst. And we got fat.” 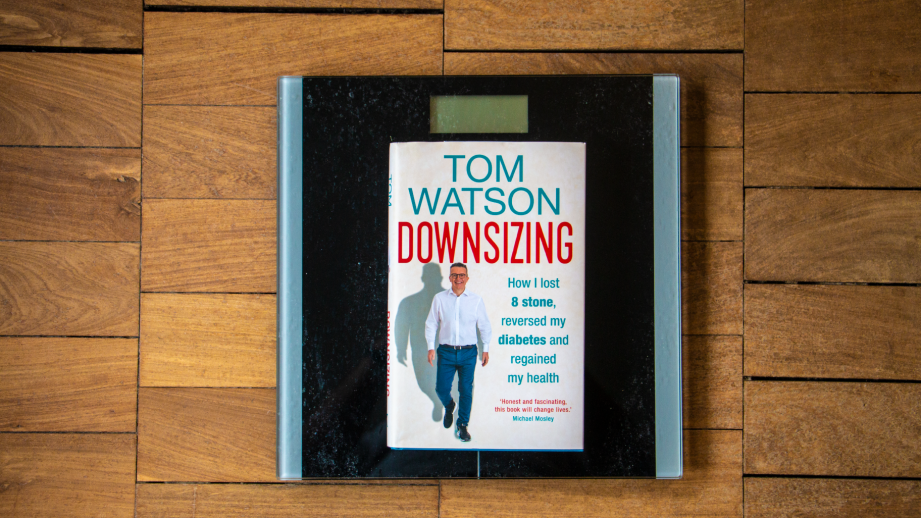